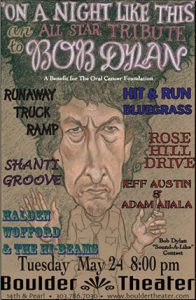 “It was kind of a no-brainer for me because of how much the Oral Cancer Foundation has helped me,” Roth said. “I use their Web site a whole lot.”

Roth, 36, is a resident of Sea Cliff, Long Island. But he grew up about six miles away, in Williston Park, going to school and playing drums with his friend, guitarist Greg Schochet, now a professional musician in Boulder, Colorado.

“We grew up playing music in the basement,” said Roth, a drummer. When the boys were in seventh grade, Schochet’s father played the music of folk legend Bob Dylan for them. From then on, the boys were diehard Dylan fans. So it’s no surprise that when Schochet decided years later to pull the musicians of Boulder together for a themed evening of music, it should be a tribute to Dylan, held on the famed musician’s birthday.

“I was out there for a visit about a year before that,” said Roth. “And one day we sat around playing Dylan songs for hours and hours. He said ‘Next time you come out, let’s play a gig.’ Then he called up a few weeks later and said ‘I have a better idea. Why don’t we make it a benefit, and you can choose the beneficiary.’”

Roth immediately thought of the Oral Cancer Foundation, a Newport Beach, CA-based nonprofit organization whose online forums and bountiful resources helped him through two bouts with oral cancer. Roth remembers well the process of his diagnosis.

“I was at the dentist and they didn’t really even notice,” he said. “But I felt what I thought was a canker sore. And the hygienist said, ‘Oh wow, your throat’s really red.’ And I just kind of blew it off.” Three weeks later, the sore had not healed, and spicy food was causing Roth considerable pain. He made an appointment with an ear, nose, and throat doctor who immediately ordered a biopsy.

“The biopsy was positive,” Roth said, adding that his initial cancer was caught at Stage 3. “He wanted to remove most of my tongue. I immediately got a second opinion, which lead to a surgical removal of the cancer.”

Roth, who neither smokes nor drinks, was puzzled about why he’d gotten oral cancer—until he learned that smoking and drinking are just two risk factors for the disease. An emerging cause of oral cancer in non-smokers is the Human Papilloma Virus. Unlike the incidence of oral cancer from smoking which usually occurs in the 5 th and 6 th decades of life, oral cancers created by this virus occur frequently in young people. Surgery held Roth’s cancer at bay for 14 months.

“When it came back, it came back on the roof of my mouth, which is weird I guess–but they caught it so early because I was going every month to get checked. The second time they caught it, it was Stage 1 or less.” That time, Roth underwent radiation treatments, which ended in October of 2004.

“It’s tough to get through the radiation,” Roth admitted, adding that he relied on the interactive survivor and caregiver forums on the Oral Cancer Foundation’s Web site for support, information, and encouragement. There he was able to talk with others who were either experiencing the same disease issues or talk with those who had been through it before and were survivors.

Roth said he’s honored that the musical community rallied to his chosen cause. “It was a great event,” he said. “We thought Dylan would be the hook that would draw people in—and it hooked all the local bands. Everyone thought it was a great idea. And everyone knows someone who’s had cancer. It really worked out well.” 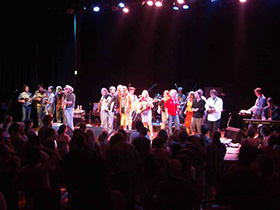 At least five bands, and a total of 42 performers showed up to play Dylan songs at the Boulder Theater on May 24. All the musicians donated their time and played for free.

“The musical community here in Boulder is pretty amazing,” said Schochet. “I’ve played in a whole host of bands over the years, and they all are friends with each other. We’ve put together a lot of different benefit shows, and I’ve participated in easily half a dozen of them. The nights are always super-fun. It’s not just a regular concert: it’s people doing things they don’t normally do, in different configurations.”

Given their history of musical philanthropy, getting the musicians to play at no charge was the easy part, said Schochet, who besides rallying the musicians, secured the venue, arranged for a concession, rented equipment, and took on the countless other projects that go into producing a benefit event.

“A lot of the musicians jumped at the chance to come play Dylan songs—I could have got them to come play a benefit for Oral Cancer Foundation with no problem, but the Dylan part just made them want to come out all that much more.”

Bands included Halden Wofford and the Hi-Beams, Runaway Truck Ramp, Hit & Run Bluegrass, Rose Hill Drive, Jeff Austin & Adam Aijala, and numerous solo, duo, and other acoustic acts. There was even a Dylan sound-alike contest. The event drew a crowd of 500 to 600 people, a large gathering for a Tuesday night.

“We sent the Oral Cancer Foundation a check for $3,440,” said Schochet, who says he plans to produce the concert again next year. “It was more than I’d hoped we would raise.”

OCF founder and oral cancer survivor Brian Hill said “ These individuals gave of themselves to benefit strangers they will never meet. That type of altruistic behavior isn’t something that you find every day.” These talented people, and particularly Schochet and Roth, pulled this off on their own initiative showing what can be done if your hearts in the right place. I am very grateful that they chose to associate a wonderful event like this with the oral cancer cause, and the foundation in particular. We can only accomplish the goal of reducing the death rate from this disease if we work in synergy with others. These musicians have furthered that goal, and in the process of giving back, touched the lives of literally thousands of people that have heard about their effort. We can’t thank them enough.”

The bands raised more than just money for the Oral Cancer Foundation: they raised awareness about a disease that strikes all too often, is recognized far too infrequently, and disrupts lives the world over. For that, survivor Dan Roth is happy. Roth’s checkups keep coming back normal. And he continues work he’s serene about: He’s half-owner and graphic designer at Roth Advertising, a three-person company his father started in 1971. And in May, Roth and his wife, Kathleen, welcomed a baby into their world. The little boy’s name? Dylan.