Candida, (Candida albicans) is a fungal disease. Yeasts have become increasingly significant as pathogens in all fields of medicine. This is particularly true of those which are saprophytes (they live by eating dead tissue instead of living tissue), because of their opportunistic behavior towards the altered/compromised condition of their host. Fungi are part of the world of plants, not bacteria, and there are about 100,000 distinct types of them. 50 types cause disease in humans. In people they are common, and usually harmless companions of our skin tissues, and live as inhabitants of our mucous membranes in our mouth, vaginal tract etc. as symbiotic saprophytes. The outbreaks of acute episodes where these fungi “bloom and take over” are not due to a change in the fungi, (they are with us all the time in limited numbers) but due to a change in the hosts’ immunologic defense mechanisms. Someone who is compromised by radiation treatments, antibiotic therapy, AIDS/HIV, corticosteroid treatment etc. has a lowered ability to keep them in check, and is a prime candidate to have an outbreak of Candida.

Yeast infections such as Candida were recognized centuries ago as an indicator of much larger underlying diseases such as diabetes mellitus, malignant tumors, and chronic infections. (Sort of the miners canary.) When antibiotics are used, there is a flip-flop in the balance of the natural occurring flora in the mouth (and elsewhere) where the normal flora is damaged by the antibiotic therapy to the advantage of the fungus, which then blooms. Damage to the mucus membranes and to the salivary glands also allow for Candida colonization. Dry mouth (xerostomia), upsets the balance of microorganisms in the oral cavity. When the delicate balance of normal and abnormal bacteria is disturbed, an overgrowth of this fungus may occur.

Using an extreme example, such as a person with HIV/AIDS, Candidiasis begins in the oral cavity, then has escalating symptoms in the esophagus and descending into the gastrointestinal tract, finally into organ mycosis and when in the blood system, it is finally called Candida sepsis. At this late stage it can be deadly. The clinical picture of Candida appears as white raised spots/areas which have underneath an infected red base. Left unchecked by antifungal drugs it can actually ecome several millimeters thick. The whitish portion is not firmly attached to the underlying tissue, and can actually be wiped or brushed off. Candida is commonly called thrush, and if left unchecked for a period in the mouth, it can spread to the pharynx and the esophagus and cause severe symptoms such as erosions and ulcerations of the tissues. 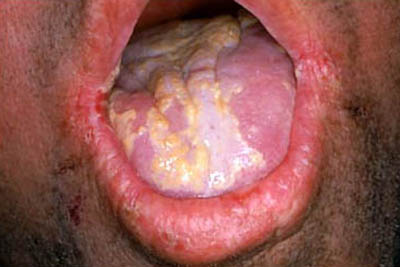 Doctors can typically diagnose Candidiasis simply by looking in the mouth or the back of the throat, but a sampling of the white overgrowth may be scraped easily from the surface and sent to a lab for positive identification. Classic symptoms of oral Candidiasis include the appearance of whitish, velvety plaques on the mucous membranes of the mouth and tongue. If the whitish material is scraped away, the base may be red (erythematous) with pinpoint bleeding. More general symptoms of candida infection include burning pain in the mouth or throat, altered taste (especially when eating spicy or sweet foods), and difficulty swallowing. The corners of the mouth may also become chapped, cracked, and sore (angular cheilitis). If the immune system has been severely compromised, the infection may cover much of the surface of the mouth and tongue, and it may spread to the esophagus. Esophageal candidiasis, which is much more common in people with suppressed immune systems, occurs deep in the throat, and cannot always be seen during an oral examination. An endoscope is commonly used to identify this type of Candidiasis. In its esophageal form, Candidiasis can cause chest pain, as well as pain and difficulty in swallowing. Once the Candida fungus migrates past the gastrointestinal tract, it can become established in other major organs such as the lungs and kidneys. Left untreated, it can even cause death. When Candida progresses to the point where it is in the bloodstream, it is referred to as Candida sepsis. At this stage it is hard to treat and recovery is extremely difficult. The death rate from late stage disseminated Candidiasis may reach seventy percent. The importance of treating it in its early stages cannot be overstated.

Candida overgrowth may also cause a condition called Intestinal Hyper-Permeability, more commonly know as Leaky Gut Syndrome (LGS). This condition occurs when the wall of the gastrointestinal tract is damaged. The Candida change form, creating rhizoids, root like structures that break the intestinal walls. A healthy intestinal wall will allow only nutrients to enter bloodstream, but when it is damaged, larger molecules such as incompletely digested fats, proteins, and toxins may also slip through. The body recognizes these substances as foreign and forms antibodies to them, causing the patient to suddenly become allergic to foods they would previously been able to eat without a problem. LGS may also lead to environmental allergies, causing the patient to respond to inhalants in their general environment. The patient may also form antibodies to proteins similar to, or the same as, human proteins This can lead the immune system to attack parts of the patient’s own body. With LGS, vitamin and mineral deficiencies are common because the patient lacks the ability to move minerals and vitamins from the gut to the blood. When the Candida becomes controlled and the gut has healed, food allergies will remain until antibodies to that food have been eliminated.

Antifungal agents are vital to the control of candidiasis. These can be either systemic or topical. In selecting a topical oral antifungal agent, the patient’s degree of xerostomia and possible inability to dissolve a lozenge must be considered, as well as the level of oral hygiene and the risk associated with the high levels of sucrose in topical preparations. Topical antifungal agents include nystatin and clotrimazole (or other closely related agents), either of which may be applied directly to the oral lesions as a dissolving lozenge or in a liquid wash. Infections that are resistant to those agents, or that have already disseminated, are treated with IV medications such as Amphotericin B, Ketoconazole, Itraconazole, and some oral antifungal agents such as Fluconazole (Diflucan). These are more potent drugs, and are more likely to cause side effects, including stomach upset, diarrhea, nausea, and elevated liver enzymes.

While “natural” or homeopathic remedies exist which may alleviate Candida outbreaks, never self treat Candida infections with a health store remedy without consulting your doctor first. These health store remedies are not as potent as prescription medication, and may not be as effective for those who have had radiation therapy or chemotherapy. One of these types of treatments is gentian violet, a dye made from coal tar that may be purchased from some pharmacies, health food stores, and other places where alternative therapies are sold. The dye is applied by using a cotton swab to coat the Candida blotches. It is best to avoid swallowing the dye, as it can cause upset stomach. Gentian violet can also stain the inside of the mouth, but this fades over time.

Your doctor should always be consulted, as a delay in complete control of the Candida “bloom” can allow it to spread to further areas of the body. Though potentially serious, prescription anti fungal agents can quickly eradicate a Candida infection.

Clinical Practice Guidelines for the Management of Candidiasis: 2009 Update by the Infectious Diseases Society of America