OCF partners with Proctor and Gamble, Walmart, USC School of Dentistry, and others to offer free public screenings 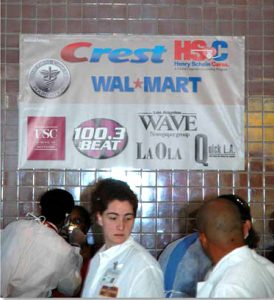 The Oral Cancer Foundation lit a fuse in Los Angeles recently that it hopes will set off a nationwide firecracker of prevention against a disease that, while potentially lethal, is highly survivable if caught in its early stages.

“The big issue with oral cancer is that few people are aware of it, and doctors and dentists don’t always screen for it,” says Harvey Pasternak, a consumer healthcare products consultant. Pasternak recently teamed with Oral Cancer Foundation founder Brian Hill bring to life Hill’s idea of setting up free screenings for oral cancer in highest-risk communities.

Brian Hill came to me with a premise. “You can go to a drug store and get screened for high cholesterol, or high blood pressure,” Hill said, “why not oral cancer detection as well? Why not set up a free oral cancer screening at a retailer, and see if we can engage the public in the same way.” Pasternak took the challenge and started inquiring with large Los Angeles retailers to secure a location for an initial proof of principle event.

“I had three large companies interested in hosting the program, but didn’t have any support to pay for what else is was needed— shipping for banners, advertising, dental equipment for the dentists who would do the screenings.” The Foundation reached an agreement with Wal-Mart to hold the screening at its new store in the Baldwin Hills. The Crenshaw District location was important: Oral cancer hits hard among low-income minority groups—a population that has difficulty traveling to and paying for regular medical screenings. The screening fit in perfectly with Wal-Mart’s philanthropic goals, which allow their stores to be used as venues for public health events.

“We operate globally and give back locally,” says Willie Cole, community involvement coordinator at the Baldwin Hills Wal-Mart, which is part of a shopping mall. “We have a responsibility to give back to the community we are in, to uplift it.” Cole says the screening helped spread awareness about a disease that seldom receives coverage in the popular press.

“I know that once a person is aware of a situation, they can better address it,” says Cole. “When Brian Hill talked to me about oral cancer, I had no idea what it was—of course the words oral cancer are self-explanatory, but who thinks about that with high blood pressure, heart disease, lung cancer, cervical cancer, breast cancer, running rampant and recognized in society? The screening just seemed like a very good thing to hold.”

The next key task for Pasternak and the OCF was to find a manufacturer to sponsor the event with necessary supplies. Pasternak started knocking on large corporate doors such as GlaxoSmithKline, makers of oral health products and of stopsmoking aides such as patches and chewing gums; and consumer product giant Procter & Gamble, whose product lines include toothpastes and oral rinses. “Right off the bat, Procter & Gamble they said ‘this is the kind of stuff we love,’”

Pasternak says. “They said if the Oral Cancer Foundation could prove the public venue, free-screening concept works, they’d become financial supporters to do it at Wal-Mart stores nationwide.”

The Foundation’s free oral cancer screening had turned into a proof-of-concept event that could prove to save untold lives nationwide. Meanwhile, Hill worked to line up dentists to do the actual screenings. He called on contacts including Harold Slavkin, Dean of USC’s School of Dentistry, and long time oral cancer advocate. Slavkin arranged for a team of six dentists from the school’s faculty to conduct screenings at the June event. “The concept of going into the community–where the community shops–was a brilliant idea,” says Slavkin. “ It made it easier for people to access this service and get their three-minute screening. We solicited faculty volunteers who represented the diversity of the community. The turnout and participation was outstanding.” 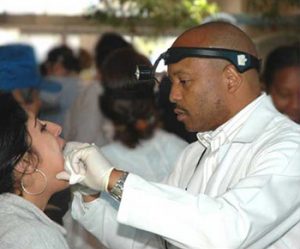 Adding to the volunteer screening team was Dr. Ted Burnett, who has a private dental practice in Los Angeles. “I was introduced to Brian (Hill, OCF founder) through a mutual friend of ours, and he brought to my attention that they were looking for minority doctors to be involved in the screenings,” Burnett explains. “They had solicited over 200 doctors in the area, minority and non-minority, and didn’t get any appreciable responses. I said I’d be glad to do it. It was in my area and it was something I should be doing–this is why I went into health care.”

With doctors, a venue, and supplies in place, all the Foundation needed was people to screen. They started putting the word out with the help of local television, radio, and newspapers. They contacted Councilman Bernard Parks, to gain the support of a highly visible local politician, and then put in some good old-fashioned legwork.

“KABC Channel 7 news ran two- four minute segments the day before and the day of the screening. Brian Hill participated in the TV interview along with head of diagnostics at USC, Dr. Mavash Navazesh,” says Pasternak “We had print ad announcements in the free local community newspapers that are big in the area, and we put up fliers at the senior home across the street, at nearby banks and restaurants, the Magic Johnson Theaters, Starbucks, even an ice cream shop. But the big question was would people show up.” The largest urban music / hip-hop radio station in the US, 100.3 BEAT-FM broadcast the news of the upcoming event for several days before, further getting the word out and helping to ensure the turnout.

“I saw some curiosity raised among younger people,” says Dr. Mahvash Navazesh, chair of the Division of Diagnostic Sciences at USC’s School of Dentistry. “When they realized that the procedure wasn’t painful and didn’t take long, soon they to were in line and to get their screenings. So it was a great opportunity to raise awareness not only among adults who smoke, but also among young people that smoking can put them at risk for oral cancer.”

Navazesh said it also helped that the team of volunteer dentists included Spanish speakers. “Sometimes when there are language barriers, it’s harder for people to make the decision to be evaluated,” she says. “But this way, it was easier for people to relate. Also, the surroundings helped. There in a shopping mall, it was non-threatening.” 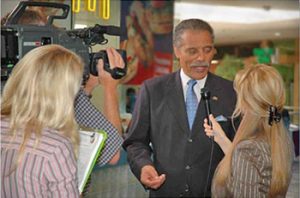 By the end of the day, the dental team had screened 551 people— including Councilman Parks–for oral cancer. Of that number, seven were determined to have suspicious, possibly pre-cancerous conditions, and they were referred for further evaluation or biopsies. While this was important, the awareness of the disease, the risk factors for it as well as the early signs and symptoms were spread to thousands of people throughout the community.

“In the United States, two percent of human cancers here are in the mouth,” says Dean Slavkin. “But if you sample predominantly African American men, it jumps up to become the fourth most common cancer. So having the screening in the Crenshaw area was a good idea. Doing it at Wal-Mart made a lot of sense, and having the cooperation of the distributors and different people who made it possible made it an excellent prototype of what could be done all over the nation.” And Dr. Slavkin is well versed on the subject… before his position as dean of the dental school at USC he was the Director of the National Institute of Dental and Craniofacial Research, a part of the National Institutes of Health. Also contributing supplies and financial support were organizations including dental care product distributor Henry Schein, portable dental lighting manufacturer PeriOptix, with the major financial funding provided by The Oral Cancer Foundation. OCF founder Hill is looking forward to the next steps.

Hill is more than happy with the results of this first effort. Using Nielsen ratings, and other measurable mechanisms for determining impact, the one day event garnered more than 2,500,000 viewer impressions of the “oral cancer and early detection” message and the sponsors names and products. While we have showcased this one event here, these free public screenings have been conducted in other areas with similar results. Companies who normally use sampling as a marketing tool, or who feel that they would benefit from the association with an event such as this should contact Brian Hill at the foundation to discuss the details of what is involved in co-sponsoring an event that brings attention to their firm or products. A 15-minute video was made of the event, and is available to other potential sponsors and organizations who would like to partner with the foundation in bringing an event such as this to their community.