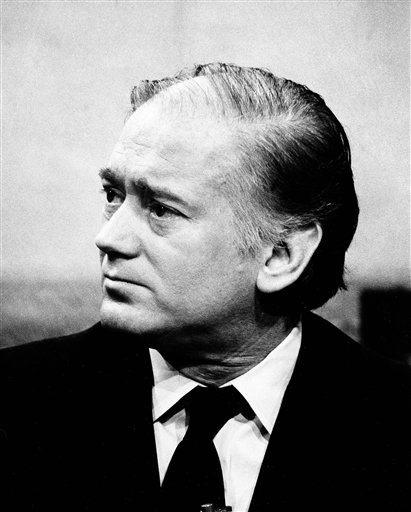 **FILE** A 1977 file photo of Clay Felker, founder of New York magazine. Felker, the magazine mogul who revolutionized the city magazine genre as founding editor of New York, died Tuesday, July 1, 2008, at his New York City home after a battle with throat cancer, a magazine spokeswoman said . He was 82. (AP Photo)

Clay S. Felker, the pioneering editor who founded New York magazine and helped launch the new journalism of the 1960s, with its novelistic techniques and strong point of view, died July 1 at his Manhattan home at 82. He had battled throat cancer in recent years.

“He had beaten cancer three times,” his wife, writer Gail Sheehy, said yesterday. “He died at home in his sleep.”

By defining the form of the modern city magazine and encouraging writers to address modern life in a bold, vividly descriptive style, Mr. Felker was one of the most influential journalists of his time.

His first triumphs came in the mid-1960s, when he was editor of New York, originally the Sunday magazine of the New York Herald Tribune newspaper. He gave writers such as Tom Wolfe and Jimmy Breslin the freedom to roam the city and write as they pleased, making the colorful supplement “the hippest Sunday reading in town,” as Newsweek put it.

When the newspaper folded in 1967, Mr. Felker used his severance pay to buy the magazine’s name and secured more than $1 million in financing to rebuild New York as a glossy weekly publication. When it debuted on April 8, 1968, it was not an immediate success, but Mr. Felker soon found an innovative formula that would inspire imitators around the world.

He combined in-depth articles on politics, crime and finance with lighter features on shopping, restaurants, reviews and listings that made New York, in Mr. Felker’s words, “a guide on how to live in this city.” The magazine’s lively design, created by art director Milton Glaser, reflected Mr. Felker’s view of New York — both the city and the magazine — as a bright and varied feast for the mind and the eye.

His complicated personality, which ranged from soothing and encouraging to explosive and temperamental, left few people indifferent.

“He is variously described by associates and acquaintances as autocratic, devious, dishonest, rapacious, egotistical, power mad, paranoid, a bully and a boor,” a 1977 Time magazine article said. “Almost in the same breath, the same people call Felker a genius.”

In the early years of New York magazine, Mr. Felker assembled a staff of writers that included Wolfe, Gloria Steinem, Nora Ephron, Richard Reeves, Pete Hamill, Jack Newfield, Aaron Latham, Gael Greene and Sheehy, who was Mr. Felker’s third wife. He exhorted them to write in distinctively personal voices as they explored the city’s trends, horrors and delights. An anthology of writing from New York will be published in fall.

“It was a magazine that helped create the notion of the writer as star,” one of Mr. Felker’s writers, Ken Auletta, told The Washington Post in 1993.

New York had a tone that seemed to match the heady confusion of the times. Much of the issue of June 8, 1970, was devoted to Wolfe’s “Radical Chic,” which described a fundraiser for the Black Panthers at the apartment of conductor Leonard Bernstein. Wolfe’s scathing story, which coined the term “limousine liberals,” became a classic of new journalism. Six years later, in another New York article, Wolfe summed up the entire era when he called it the “Me Decade.”

Wolfe called Mr. Felker “the greatest idea man that ever existed” in a 1993 interview with The Washington Post.

“My philosophy is that you have faith in the writer’s point of view,” Mr. Felker told The Post. “You pick the writers you believe in and give them their freedom. As opposed to most editors who want to mold the writers into what they want, make them a tool of the editors.”

As an early champion of women in journalism, Mr. Felker helped Steinem’s fledgling Ms. Magazine get off the ground when he included a 40-page preview issue in an edition of New York.

Yet, for all his success in defining an era, Mr. Felker was just as often derided for what could be called his feats of Clay. He once published a nude photo of Viva, an actress associated with Andy Warhol, and critics found some articles to be adolescent or needlessly provocative.

The journalism review More complained that New York magazine was little more than “a weekly diet of superficiality at best and deception at worst, reality distorted for the sake of titillation.”

Breslin parted with Mr. Felker in the early 1970s, saying the magazine “caused me to become gagged with perfume and disheartened by character collapse.”

As the circulation and reputation of his flagship magazine grew, Mr. Felker sought to expand his journalistic empire in the mid-1970s by buying the Village Voice and by launching New West, a West Coast version of New York.

But his lavish spending on limousines, office space and personal chefs drew criticism from his board of directors, who rejected his demand that they buy him a house in the Hamptons. Mr. Felker invited Rupert Murdoch, then newly arrived in the United States as owner of the New York Post, to invest in New York magazine.

Instead, Murdoch made a hostile bid for the three publications that Mr. Felker controlled. With backing from then-Washington Post Co. Chairman Katharine Graham, Mr. Felker proposed a series of counteroffers, but he was outmaneuvered by Murdoch and ousted in January 1977.

Feeling betrayed by Murdoch, Mr. Felker said, “Rupert Murdoch and I disagree on the meaning of friendship, of human values and the meaning of journalism.”

Most of the New York staff walked out in solidarity, but Mr. Felker seemed to have lost more than just his magazine. He would spend the rest of his life trying to regain his magic touch, though seldom with the same success.

“His ambition was too large,” a New York staffer told The Post in 1993. “Why wasn’t he satisfied with New York magazine? He wanted to be Citizen Hearst, and he lost his dream.”

Clay Schuette Felker was born Oct. 2, 1925, in St. Louis, where his father was managing editor of the Sporting News. Mr. Felker printed his first newspaper, the Greeley Street News, when he was 8 and sold it in his hometown of Webster Groves, Mo.

He entered Duke University in 1942. He graduated nine years later, after wartime service in the Navy and a stint as a statistician for the New York Giants baseball team.

He moved to New York and wrote about sports and politics for Life magazine. With his background in sports — he later wrote a book about baseball manager Casey Stengel — Mr. Felker was assigned to a secret Time-Life group that developed Sports Illustrated in 1954.

As features editor of Esquire magazine from 1957 to 1962, he hired Gore Vidal to write a column on politics and asked novelist Norman Mailer to cover the 1960 Democratic National Convention. Mailer’s article, “Superman Comes to the Supermarket,” was hailed as an early example of new journalism.

When Mr. Felker lost out to Harold Hayes as top editor of Esquire, he left the magazine and worked as a consultant for the Herald Tribune, a distinguished but struggling newspaper. In 1964, he became editor of the paper’s Sunday magazine, which he transformed into a showcase of smart reporting and writing.

“Each week’s lineup was as varied and unpredictable as the city itself,” Richard Kluger wrote in “The Paper,” a history of the Herald Tribune.

In 1977, after Mr. Felker was forced out as editor of New York magazine, he became publisher and editor of Esquire, where he hoped to revitalize the ailing men’s journal. Less than two years later, the magazine was sold out from under him, and he was adrift once more.

For several years, he was a consultant to 20th Century Fox, which transformed several stories he had edited, most notably “Saturday Night Fever” (1977) and “Urban Cowboy” (1980), into movies.

Mr. Felker continued to have modest triumphs as editor of Adweek magazine and the business-oriented Manhattan Inc. in the 1980s, but both efforts proved short-lived. He was still remembered as the editor who created — and lost — New York.

He turned to teaching in the 1990s and had a long association with the Graduate School of Journalism at the University of California at Berkeley, which named its center for magazine studies in his honor. He became a powerful force at the school, spotting young talent and overseeing the magazine writing and design programs.

Mr. Felker viewed the glamour and excitement of New York with never-ending wonder. He shared a spacious apartment on East 57th Street with Sheehy, his wife since 1984, and Manhattan’s literary crowd clamored for invitations to their parties. Long after he had retired from running magazines, Mr. Felker continued to be regarded as a sage of journalistic wisdom.

“His reach may have exceeded his grasp,” Newsweek declared in 1977, but “Felker has left a strong and highly personal imprint on American journalism.”

His earlier marriages to Leslie Blatt Felker and actress Pamela Tiffin ended in divorce. In addition to his wife, survivors include a daughter, Mohm Phat Sheehy of Cambridge, Mass.; a stepdaughter, Maura Sheehy of Brooklyn, N.Y.; a sister; and three grandchildren.