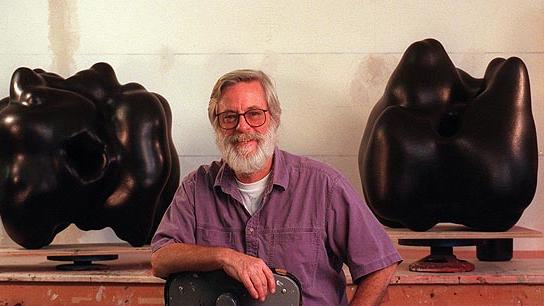 Kenneth Price, a prolific Los Angeles artist whose work with glazed and painted clay transformed traditional ceramics while also expanding orthodox definitions of American and European sculpture, died early Friday at his home and studio in Taos, N.M. He was 77. Price had struggled with tongue and throat cancer for several years, his food intake restricted to liquids supplied through a feeding tube. Despite his infirmity, he continued to produce challenging new work and to mount critically acclaimed exhibitions at galleries in Los Angeles, New York and Europe. At the time of his death Price had completed preparations for a 50-year retrospective, scheduled to open at the Los Angeles County Museum of Art in the fall in an exhibition designed by architect Frank Gehry.

The show will travel to the Nasher Sculpture Center in Dallas and the Metropolitan Museum of Art in New York. A 1992 retrospective traveled from the Menil Collection in Houston to the Walker Art Center in Minneapolis. In the decades following World War II, Price was among the first generation of iconoclastic L.A. artists to attain international stature. Three Price sculptures were on view in "Pacific Standard Time: Crosscurrents in L.A. Painting and Sculpture, 1950-1970," a survey of 47 leading postwar artists that closed this month at theJ. Paul Getty Museum. Important examples of his work are currently included in three additional museum shows featured as part of the Getty-sponsored Pacific Standard Time, which chronicles significant aspects of Los Angeles art made during the city’s efflorescence between World War II and 1980. Price’s work is often erroneously described as having "transcended" ceramics to become sculpture. However, his organic and geometric forms, use of vibrant colors and provocative installation motifs instead speak of a thorough knowledge and embrace of critical aspects of ceramic history and its shifting place in art’s continuum. Price’s exquisitely crafted art, often leavened by erotic wit, simply accepted clay’s sculptural bona fides. "Price’s practice has remained resolutely original, challenging categorization and redefining contemporary sculpture," said Stephanie Barron, senior curator of modern art at LACMA and organizer of the Price retrospective. "The observation that critic Lucy Lippard made in 1966 seems prescient: ‘It is a fact rather than a value judgment that no one else on the East or West Coast is working like Kenneth Price.’ " Especially important to his work was the precedent of the Bauhaus, the experimental school in 1920s Germany that sought to fuse crafts and the fine arts. Hand fabrication had been separated from machine manufacture during the Industrial Revolution, creating a distinction between fine art and applied art and establishing a rigid hierarchy for them.

The Bauhaus sought to reconcile the two into a modern, unified whole. For many years Price kept an abstract image of nested color-squares by Bauhaus instructor Josef Albers, the German-born painter and color theorist, hanging on a wall in his Venice studio — the only work by another artist displayed there. Price, reflecting egalitarian impulses of the 1960s, found surprising ways to incorporate that legacy in contemporary social terms. Among his most charming works is an extensive series of drinking vessels he called "snail cups." A variety of snails — a garden nuisance but an ancient symbol for slow, steady and self-sufficient progress — carry and adorn the small cups, one of the oldest and most basic vessel forms. With humor and affection, the snail cups nod to the ’60s handicraft fashions of the Aquarian Age. Completely different in form, but likewise indebted to the Bauhaus, are geometric vessels glazed in flat, bright, primary and secondary hues. Their compositions recall early 20th century Russian Constructivist paintings by El Lissitzky and Dutch De Stijl works by Piet Mondrian, Theo van Doesburg and architect Gerrit Rietveld. Like the Bauhaus, Constructivism and De Stijl valued pure abstraction, dynamic asymmetry and simplified shapes and colors. Price’s exquisitely made cups brought down to earth the grand Utopian aspirations of those early 20th century movements. Price’s use of bright color on clay forms was a distinctive feature of his work. Sometimes he achieved it through the use of acrylic paint rather than fired glazes, a method that upset ceramic purists but satisfied the artist’s determination to follow his interests. The technique has reached new heights since the 1990s. Sexy, bulbous forms are painted black, layered with lush acrylic colors and then sanded to reveal the under-paint in richly textured spots of brilliant hues.

Some sculptures carry 70 thin coats of paint. Speaking of his early years, Price told interviewer Kristine McKenna in 1996, "In those days everything was supposed to reflect the inherent nature of the materials, and consequently there wasn’t much colored clay sculpture prior to the ’60s. … But I didn’t think it was a big deal to put color on form. L.A. was the city of cars and fabrication shops where you could have anything made, so it didn’t seem unusual to me to make an organic form and then give it an industrial paint job." Similarly critical to Price’s development was his adoption of attitudes and motifs familiar in Mexican pottery. His inspirations include the sensuous, poured glazes of traditional Oaxacan ceramics, plus the domestic and souvenir production of commercial centers such as Tlaquepaque, just outside Guadalajara. Encountering Mexican folk ceramics in roadside stands and souvenir shops during surfing trips to Tijuana and visits to other border regions of the American Southwest, as well as in Taos, he admired their verve, frequent humor and evident humanity. In an era when many sculptors farm out production to commercial fabricators, Price valued studio labor throughout his career. In the 1970s he spent nearly six years producing "Happy’s Curios," an elaborate mixed-media installation named for his wife, Happy Ward.

A sprawling homage to Mexican folk traditions, Pre-Columbian motifs and popular designs, the work is composed of nine cabinets of pottery, store display-windows, multimedia "Death Shrines," paintings, tapestries and drawings. The ambitious project was never completed. "It took a toll," said New Mexico art critic MaLin Wilson-Powell, who conducted an extensive interview with the artist for the LACMA retrospective’s forthcoming catalog. "It was meant to be an installation to fill an entire building in Taos, but it was too big to finish. So Kenny said he had to do what we did in Vietnam: Call it a victory and get the hell out." Portions of "Happy’s Curios" were shown to critical acclaim at LACMA in the spring of 1978. In a serendipitous juxtaposition, the memorial-themed work was displayed in galleries upstairs from the traveling "Treasures of Tutankhamun" extravaganza, a hugely popular presentation of Egyptian tomb artifacts that is generally regarded as the first museum blockbuster exhibition. The Price installation’s "Death Shrine I," an elaborate funerary altar behind a cheerful white picket fence and crowned with a skull-shaped vessel, its grinning teeth echoing the white slats in the fence, is now on long-term loan to the Harwood Museum of Art in Taos. "Unit 3," a knotty pine display case for 15 decorated vessels, is in LACMA’s permanent collection. "Town Unit 1," a fenced display case for 22 plates, cups, bowls and a double-spouted teapot is in the collection of the Museum of Contemporary Art. Other Price ceramics, as well as prints and drawings, are in the collections of Washington’s National Gallery of Art, New York’s Museum of Modern Art, the Chicago Art Institute, London’s Victoria and Albert Museum and 35 other international museums. In addition to sculptures, prints and drawings, he also made illustrations for books of poetry by Harvey Mudd and Charles Bukowski, an album cover for Ry Cooder and several bottle labels for Del Maguey mezcal spirits.

Price’s fusion of fine and applied art made him the godfather of significant younger generations of artists, many working in Southern California. Functional design is now a central component of sculpture for Kim MacConnel, Jim Isermann, Pae White and MacArthur Fellows Josiah McElheny and Jorge Pardo. Adrian Saxe, a leading artist whose elaborate clay sculptures were the subject of a 1993 LACMA retrospective, cites Price’s precedent as a key inspiration. Born in Los Angeles on Feb. 16, 1935, Price took informal trumpet lessons from jazz musician Chet Baker and drawing classes at Chouinard Art Institute while still a student at University High School. His first ceramics class came after graduation at Santa Monica College. In 1954 he transferred to USC, where he later taught, and in 1957 he enrolled at the Los Angeles County Art Institute (now Otis College of Art and Design). There, artist Peter Voulkos had shaken up the ceramics establishment with muscular, monumental slabs of roughly worked clay that infuse Asian traditions with Abstract Expressionist bravura. Voulkos’ slashed and gouged platters and brawny sculptures bucked the prevailing ceramic taste for refined harmonies between elegant form and punctilious surface.

Price began to chafe under Voulkos’ domineering influence. Deciding that he also needed specialized training in the intricate technical aspects of firing clay and the complex sciences of glazing, he enrolled in the rigorous ceramics program at the State University of New York at Alfred. He finished the two-year course in just a year, receiving a master’s degree in 1959. The following year he had the first of three solo exhibitions at Ferus Gallery in Los Angeles, showing rough-hewn, beehive-shaped covered jars, some displayed inside modest wood cases reminiscent of Joseph Cornell’s boxed assemblages. The small size of his works surprised people more accustomed to large-scale sculpture, but it announced a lifelong interest in intimacy as a subject. His second show in 1961 featured a now-famous poster of Price casually riding a Pacific wave on his surfboard, arms held high with his name printed in a rainbow-arch between outstretched hands. It included small, sleek, brightly painted "eggs" with sexually provocative fingers of tangled clay erupting from dark orifices. Friend and fellow artist Edward Ruscha once described them as "psycho-erotic." The stylistic break with Voulkos was complete. The beautifully crafted and brightly painted work was as effortless and triumphant as the playful surfing poster implied. Examples of these and other early sculptures are currently featured in the exhibitions "Common Ground: Ceramics in Southern California, 1945-1975," at the American Museum of Ceramic Art, Pomona, and "Clay’s Tectonic Shift: John Mason, Ken Price and Peter Voulkos, 1956-1968," at the Ruth Chandler Williamson Gallery at Scripps College, Claremont. In 1968 Price married Ward, who survives him along with their son, Jackson, and his step-children, Romy and Sydney. Two years later the couple moved to Taos. In 1983 they relocated to the Massachusetts coast, where they remained for seven years, until Price returned to Los Angeles and joined the USC faculty. After teaching for a decade Price went back to Taos with his family. He lived and worked in both New Mexico and California ever since.